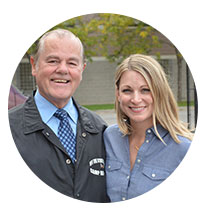 You talk a lot about “Casual Joy.” Where does that term come from?
Probably necessity is the mother of invention. So often, especially in the beginning, people were asking what the Club was about. And too often, they were looking for complicated answers. I guess they were looking for some deep psychological response. We wanted to keep it simple. Our primary goal was uncomplicated and direct: to give these kids the simple childhood moments that most of us took for granted. I thought the best way to describe it was “Casual Joy.”

Is that what inspired you to take over the Club in 1981?
Yes, in a way. We knew what we were about; we were determined that every aspect of the Club, its heart and soul, must be child-oriented—not just on paper or in theory, but in fact. We knew that, when that was done, we would be on the right track. We also knew that none of our efforts would be meaningful unless we could create a safe environment, create a safe haven that the gangs could not penetrate. Safety was always first. And in the beginning, that was our biggest task—recapturing the Club from elements who would use it as a hangout. You cannot have Casual Joy when you feel unsafe.

Is Casual Joy instinctive in kids, or is it something you’ve had to nurture?
With some kids, regardless of their situation or what they’ve been through or how they live every day, the Casual Joy just bursts out of them. But it’s the others who need the Club more than anyone, I think. Because like too many things like love and trust, Casual Joy can be killed. It can be buried. It can be lost if you’ve never had it. If you’ve never been loved, you don’t know how to love, either. Or trust. That’s something you have to experience.

How do you know when a kid finds Casual Joy?
Joey D’Auria, who played Bozo the Clown, a good friend of the Club, found something at the Club that I always thought was very perceptive, and that is a certain look that a child has in his or her eyes when they’re loved and safe and know it. And we have too many kids who come to us and don’t have that look, who haven’t found it.

What happens to kids who don’t find it?
Remember the cliché “soften the child, soften the man”? It didn’t become a cliché without being tested over time. We all pay for the implications of a childhood without Casual Joy. If you don’t have Casual Joy, you eventually have casual violence.

What else do kids learn through Casual Joy?
Our kids learn that with Casual Joy, like with all things that are good, comes personal responsibility. You can’t have casual joy unless the people around you also respond and feel their responsibility to you. And so we teach our kids that it’s a chain, with links that go on and on. And once they experience that, it becomes a powerful thing.

At age 19, a kid leaves the Club and moves into adulthood. What’s the most important thing you want that kid to walk away with?
Self-esteem and all that it implies. That their worth is not dependent on a society that would judge them otherwise. That they now know who and what they are about and that they have an inexorable link to countless people out there who will be on their side, who care about them regardless of their color or economic condition. It’s an empowering feeling to feel part of something bigger. And it’s something other organizations deny kids when they focus on inclusion or exclusion, on us against them. When you leave the Club, you know what you’re about; you know that what you stand for and what you stand against are what really count.

What about the schools? Aren’t they preparing the kids for adulthood?
Throughout our history, America has said that, with an education, anyone can make it out. But today, I see wonderful, magnificent children, who, too often, are denied a real equal chance to achieve because of an educational system that is badly in need of real reform. It’s the issue of our times, as far as I’m concerned. It must be addressed, and every single person has a stake in it. We have to give our kids the hope and opportunities that come with a good education.

What about their future? Is it as bleak as many people believe?
Well, there’s a vacuum created by the lack of successful education and value training that can lead to a pervasive sense of amorality and disconcern for others. And something is going to roar into that vacuum if we don’t build a bridge—a way for these kids to make it up and out. It’s not just about giving money. It must be accompanied by values and a sense of caring and a sense of brotherhood and sharing responsibility for others. And that’s what we do at Off The Street Club. And although the situation is more desperate and the educational system is so challenged, I’m still excited about it. It sounds lofty, but I’ve always felt we’re part of a great human experiment in America. This whole idea of democracy and brotherhood hasn’t worked in most places in the world. Nobody knows how it’s going to end. And I’m exhilarated by it.

Is that why you do this? What keeps you going, day after day?
The kids. They come to us convinced that gangs run their world and often, to them, seem to be in control of their neighborhood. And we put that look in their eye, that glimmer of Casual Joy that is their birthright. I really believe that, if you can give one example, it disproves the lie that there can be none. I’m not without hope because I’m surrounded by hope at the Off The Street Club. Yes, the negative forces around us are multiplying at a frightening rate, and they could swallow these kids up if we don’t act. We can curse the darkness or light a candle. And our light is shining brightly.